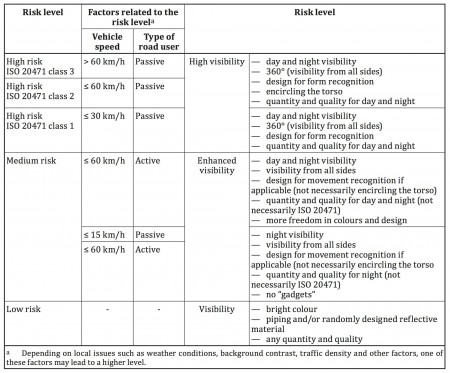 However, ISO 20471 still has a clear limitation and according to Annex A of the same standard apply only to passive road users. Depending on the traffic speed and the environmental conditions  class 1, 2 or 3 is required.

In another way of use, such as those by active users, one can apply enhanced visibility clothing. This clothing does not necessarily conform to EN ISO 20471. However, this type of clothing easily can lead to confusion at manufacturers and end users.

Clothing which is sold under this heading must comply with EN ISO 20417 and distinguishes between three classes. The choice of the classification depends on the conditions of use (such as the traffic speed). In all cases, the clothing intends for a passive user. According to the definition in the standard a passive user is a person who is on the road but not participating in traffic and who pays attention to other things than the traffic around him.

This user must be recognized quickly and unambiguously by its surroundings both day and night under illumination of motor vehicle headlamps. The minimum requirements of the standard EN ISO 20471 should meet this need.

Active road users are individuals who participate in traffic with their full attention.

Enhanced visibility clothing provides day and night visibility from multiple directions. If applicable, designed the movement of a person is easily recognizable. In addition, more hivis colors are permitted and there are no specific design requirements such as EN ISO 20471.

For enhanced visibility clothing it is not necessarily to meet the requirements of EN ISO 20471.

The latter group is that of clothing with visibility features such as the use of bright colors (not necessarily fluorescent), application of retroreflection in piping, labels or other restricted areas.

Compliance with the Directive

A CE mark may be applied only  if the personal protective equipment meets the requirements of the Directive 89/686/EEC. If a PPE complies with a harmonized standard the legal presumption of conformity with the Directive will apply. For clothing that do not comply with EN ISO 20471, but is going to be marketed as safety clothing it will be more difficult to demonstrate conformity, it will often depend on the opinion of the Notified Body.

There is also the possibility that this type of clothing is going to be sold „as in line with” EN ISO 20471.

By including Annex A to EN ISO 20471, the CEN experts wanted to give some guidelines for the choice and selection of high visibility clothing but simultaneously they created space for dubious product introductions.